An apprehension is mounting among the people of north-eastern region that the mainstream media is ignoring the flight of its people and has been working like a PR agency of the government to justify the imposition of AFSPA. Recently, it has been observed that the media was flooded with chest-thumping news and views on cross border operation on NE militants in Myanmar. All of sudden one IPS officer is being marketed as ‘face that militants fear’ even with factual errors. However, at the same time a huge portion of Assam and Arunachal Pradesh was witnessing devastating flood. No media was running ‘hastag’ race for the flood victims of Assam and Arunachal Pradesh.

As per the official release of Assam State Disaster Management Authority dated 13th June 2015, more than six hundred villages were submersed and over three lakh people affected in the recent flood. Though officially not reported, at least three persons have died so far in this devastating flood. This is harvesting season in Assam and the flood has destroyed a huge area of ready to harvest corps, the official figure is 11041.53 hectors. 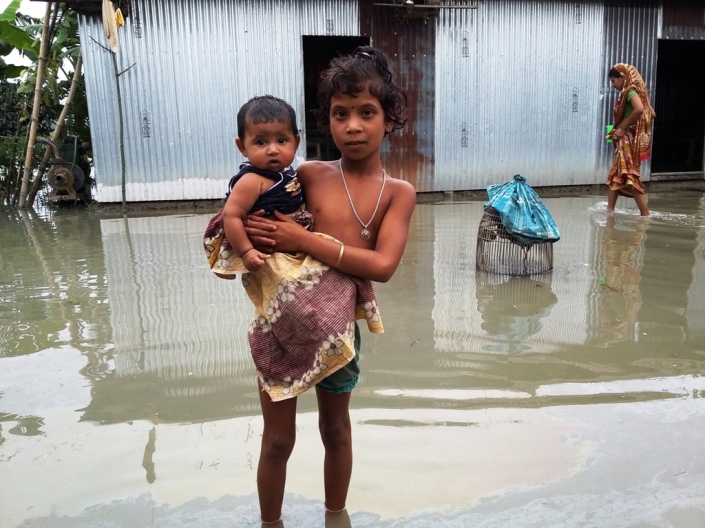 I was getting disturbing updates from my home district Barpeta since 11th of June, 2015. Subsequently, I communicated with the district administration and got a quit relaxing response “we are monitoring the development and ready to act if any necessity arises” The concerned Circle Officer categorically informed me that the flood situation is still manageable and no need of taking rescue and relief operations. However, I was still getting SOS calls from my native district and finally decided to visit the area next day morning to have stock of the situation. While travelling from Guwahati to Barpeta, as I entered Nalbari district, I could easily see the devastation in the nearby agri-fields. The farmers has abandoned ready to harvest rice cultivation due to flood water. They have occupied half of the road for drying up the partially damaged harvested crops.

Situation in Barpeta district is more depressing; officially it is worst affected district in recent flood. Innas Ali, a marginal farmer who cultivated high yielding rice on his one hector agri-land and invested nearly sixty thousand rupees has been able to harvest only half of his total cultivation. Ali says that one fourth of the harvested crops have been damaged as it germinated due to heavy rain. Since last two/three decades, the peasants have started cultivating high yielding variety of rice replacing traditional one. They have been irrigating their paddy fields by diesel run power-pump machine incurring higher cost comparing to government provided irrigation facility. In lower Assam, irrigation facility is mostly managed by the farmers, which forces them to incur more costs and forces them to knock the door of money lenders for credit to meet the costs. A study conducted by Gorky Chakravarty of Institute of Development Studies, Kolkata revealed that nearly 67% of his respondents in Mandia, Chenga and Ruposhi block of Barpeta district are indebted and only 2.43% of them got credit from organized financial institutions. A huge chunk of people who get their credit from moneylenders often agree to repay crops instead of money. His study says that those ill-fated people are forced to pay an annual rate of interest ranging from 72% to 360%. In such a situation, any one can imagine how this flood is going to affect the lives of people like Innas Ali. 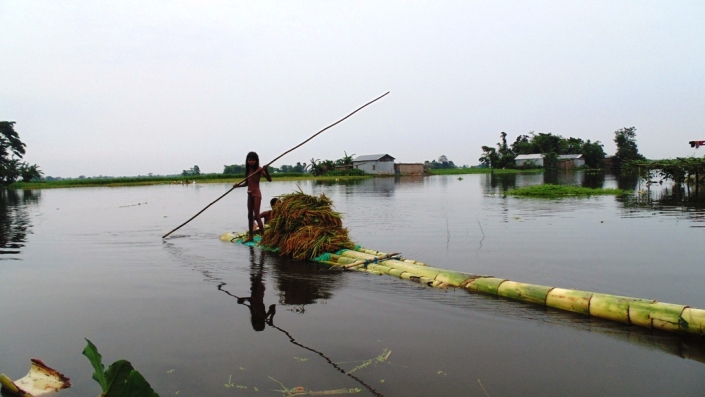 A group of young people helped me to reach riverine areas like Islampur, Rasulpur, Kadong Char, Kaimari Char under Baghbar Revenue Circle in Barpeta district. When, we crossed one stream of river Beki and entered to Islampur char (River Island) under Baghbar Revenue Circle – the scenario is heart-wrenching. It was no less than a river, it seems small huts are floating in the water, some people are crossing high current river Beki on their raft to fetch drinking water. Human being, frogs, earth-worm all are coexisting. Some of them have left their houses and took shelter in other’s place, but most of them are hazardously experiencing the flood along with their domesticated animals.

There is no presence of government machinery in all the places we visited. There is no arrangement of basic humanitarian assistance like food, drinking water, medicine etc. Even, the administration has not been in those places for any kind of assessment. It was appalling to observe that the affected people also don’t feel that government will support them in any way or other. Seeing the helplessness of the flood victims and the indifferent attitude of state machinery, as a civil society group we decided to support the victims within limited our capacity. We have started distributing general relief materials since 14th of June, 2015 and continued to update the concerned Circle Officer over telephone and keep on sending photographs to his mobile phone though WhatsApp. 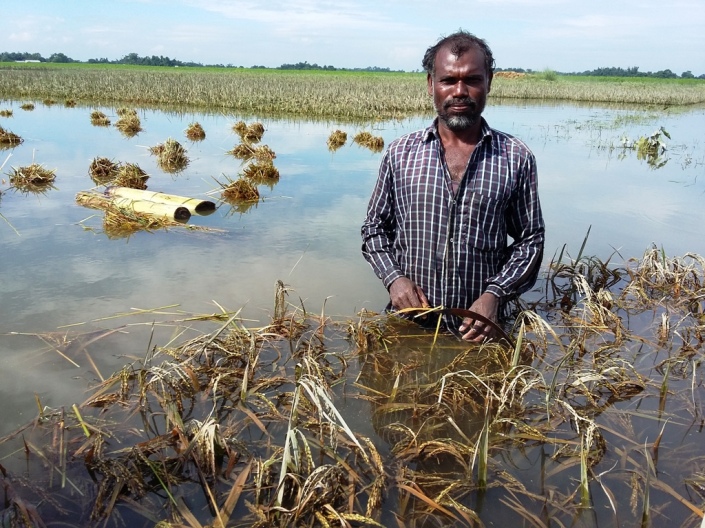 On 17th of June, he informed me that as per the information he got from his official sources there is no need of providing any relief or rehabilitation grant in those chars! So, was my observation was wrong? The photographs with GPS location were fake? The heart touching narratives of the victims about their damaged crops and belonging were false and plotted stories to drain money from government treasury?

This is what written on our forehead” Citing the example of their 411 No. Alipur (Tapajuli Pathar) Lower Primary school, Abdur Razzak said that, the head teacher of the school is not attending her duty for the last two years. The assistant teacher appointed through TET (Teacher Eligibility Test) occasionally comes to school and since the arrival of monsoon; the assistant teacher has also stopped attending his duty. The char people have even brought the issue to the notice of Deputy Commissioner and other officials of education department of Barpeta district. But nothing has changed so far and the school which was established by British government in 1945 has become just a structure with four walls and a roof.

The media, the civil society, the political class or the administration, no one is bothered about the suffering of these ill-fated people. I remember the shameful incident of last year’s flood in Goalpara. The flood victims who demanded relief and rehabilitation were brutally beaten up by the police and slapped deadly criminal charges on them. Perhaps, the flood affected people of these chars have realised – it is better to be silent and suffer rather than getting beaten up!

This entry was posted in Emergency and Humanitarian Issue and tagged Assam, Char, Education, Flood, Media.